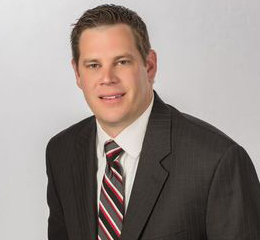 James Perrin was born in Corpus Christi, Texas, on October 19, 1974. He attended college on a full-ride scholarship for basketball. While in law school, Mr. Perrin became a sports agent and represented professional basketball and football players. James later founded The Law Offices of James F. Perrin where he personally handled a wide range of cases. He would then go on to join forces with the Wyatt Law Firm, Ltd. in 2002 and would remain with that firm until the summer of 2016. In August of 2016 he joined the firm of Fargason, Booth, St. Clair, Richards & Wilkins, LLP in Lubbock, Texas.
James Perrin has concentrated his practice on handling personal injury and wrongful death claims. He has had success in handling a wide variety of cases including: truck accidents, house fires, carbon monoxide poisoning, electrocutions, workplace negligence, oil field accidents, defective fans and heaters, defective tires, helicopter crashes and plane crashes . Mr. Perrin has successfully handled cases in eight different states.

DEVOTED TO PASSIONATE LEGAL COUNSEL IN TEXAS. As a skilled Texas personal injury attorney with years of legal experience, Mr. Perrin has seen first-hand just how devastating an accident can be on an individual or family. Whether an accident has been caused by a serious lack of safety protocols in the workplace or due to a negligent truck driver, James Perrin has devoted his practice to seeking justice for those that he represents. He is truly dedicated to helping people who have been innocently injured or wrongfully killed due to the negligence of others.

Due to his extensive experience, Attorney Perrin is ready and equipped to handle all types of complex legal matters involving the death of a loved one or a serious injury.

Please fill out the form below and one of our attorneys will contact you.

Thank you. Your submission has been sent.

Attorney Advertising. This website is designed for general information only. The information presented at this site should not be construed to be formal legal advice nor the formation of a lawyer/client relationship. [ Site Map ]

See our profiles at Lawyers.com and Martindale.com